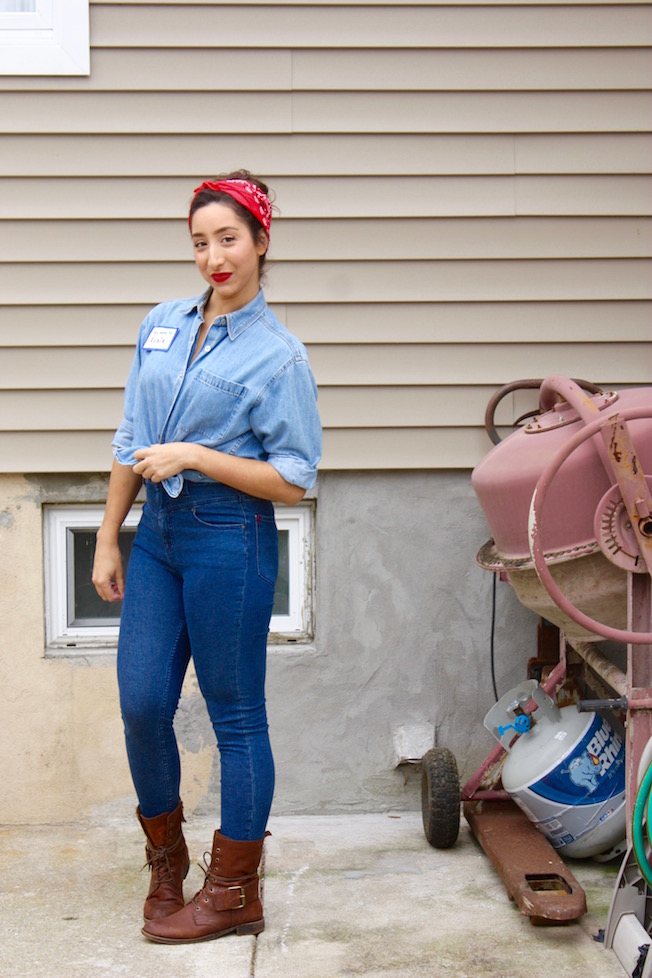 This past Saturday was my first little nephew’s 4th birthday party!  Since his birthday is so close to Halloween his party is always Halloween themed.  It’s so much fun because almost everyone gets dressed up, the kids get their faces painted, and then at the end, they all “trick or treat” at the party, it’s just so cute!
So of course, every year I go all out and I usually do a DIY costume but this year I was just so busy that I left picking a costume until the last minute and did not know what I was going to be.  I figured I would just end up wearing some cat ears or a witch’s hat and calling it a day.  But then, two nights before, I thought, “just google ‘DIY halloween costumes’ and see what you find.”  So I did and when I stumbled across Rosie the Riveter, I realized I literally have all the basics needed for this costume!
I wanted to post this ASAP for anyone that’s still trying to figure out what to wear, since Halloween is this coming Saturday. I think almost everyone has what they need for this costume and if you don’t, someone you know you can borrow from does!  Nothing has to be EXACTLY like I did it (except maybe the red bandana.)

The jeans don’t need to be high-waisted, your shirt doesn’t need to be tied up on the bottom (mine was super long and baggy so tying it made it more retro!), and your boots (you don’t need to wear boots if you don’t have them but they definitely give the costume a more rugged look!) don’t need to be brown.  I made a simple list for you below!

What you’ll need:
-A denim/chambray shirt (dark or light, whichever you can find)
-Jeans (Dark, light, skinny, loose, high low, even shorts would work if it’s hot where you are!)
-A red bandana (if you don’t have one you can literally find one at Michael’s or any craft store for like $2!)
-Combat boots (I wore brown because that’s the only color I have but it doesn’t matter what color they are)
-Red Lipstick (NOT NECESSARY – I just love an excuse to wear red lipstick and I loved matching with my bandana.  Plus, I think the red lipstick just added a little extra retro pop!)

For my makeup, I just did my usual foundation routine with a little extra blush, defined arched brows,  a soft cat eye with some black eye shadow and an angled brush, and of course the red lips! (I used lip liner to line and fill in my lips and then went over it with the lipstick.)

For my hair, I curled it (not necessary,) parted on the side, and then put it up in a bun more in the middle of my head.  So not a super high bun, but not a low bun.  I made sure I also had some volume in the front so if you need to you can kind of tease the front before putting it in a bun.  Then I took my bandana and only folded it twice so that it was a little thicker and tied it around my head with the knot right in the center.